This circuit is used to tune a guitar using two strobing LEDs. The circuit is used like a pick and then held next to the string so the LEDs shine on the string. If the guitar is out of tune the two spots illuminated by the LEDs will move relative to each other. Adjust the tuning of the string until there is no movement. Pressing the button switches between strings (as indicated by the small LEDs). After cycling through all of the strings the device goes to sleep. 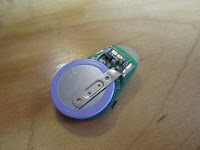 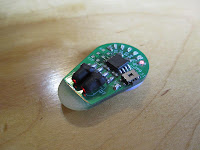